For more information on Child Criminal Exploitation (CCE) and its effect on children, click here.

Knowing the signs of child criminal exploitation (CCE) can help give a voice to children. A child is unlikely to know they are being groomed or exploited and might not speak out. Any child can be groomed into exploitation, though some children may be more at risk. Children who are more vulnerable, for example children in care and children with disabilities, may be more heavily targeted by groomers who want the child to become dependent on them.

Any sudden changes in a young person’s lifestyle should be discussed with them. It is important to remember that warning signs will be presented differently for each child or young person being exploited. Teens might also behave in a way that could be seen as ‘normal teenage behaviour’, masking the exploitation.

Signs that a child or young person is being groomed or exploited into criminal activity or county lines include: 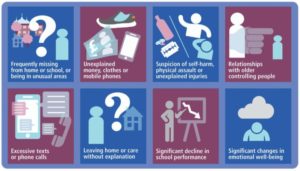 Click here for more information and guidance on Criminal Exploitation and County Lines from the Home Office.

Click here for NSPCC’s information and guidance on grooming.

If you are concerned about a child, please contact Front Door For Families on 01273 290400, FrontDoorForFamilies@brighton-hove.gov.uk, or use their Online Referral Form.

If a child is in immediate danger, you should contact the police by calling 999.

Send us an email

Connect with us
Safeguarding is Everyone’s Responsibility